Birds by a Pond 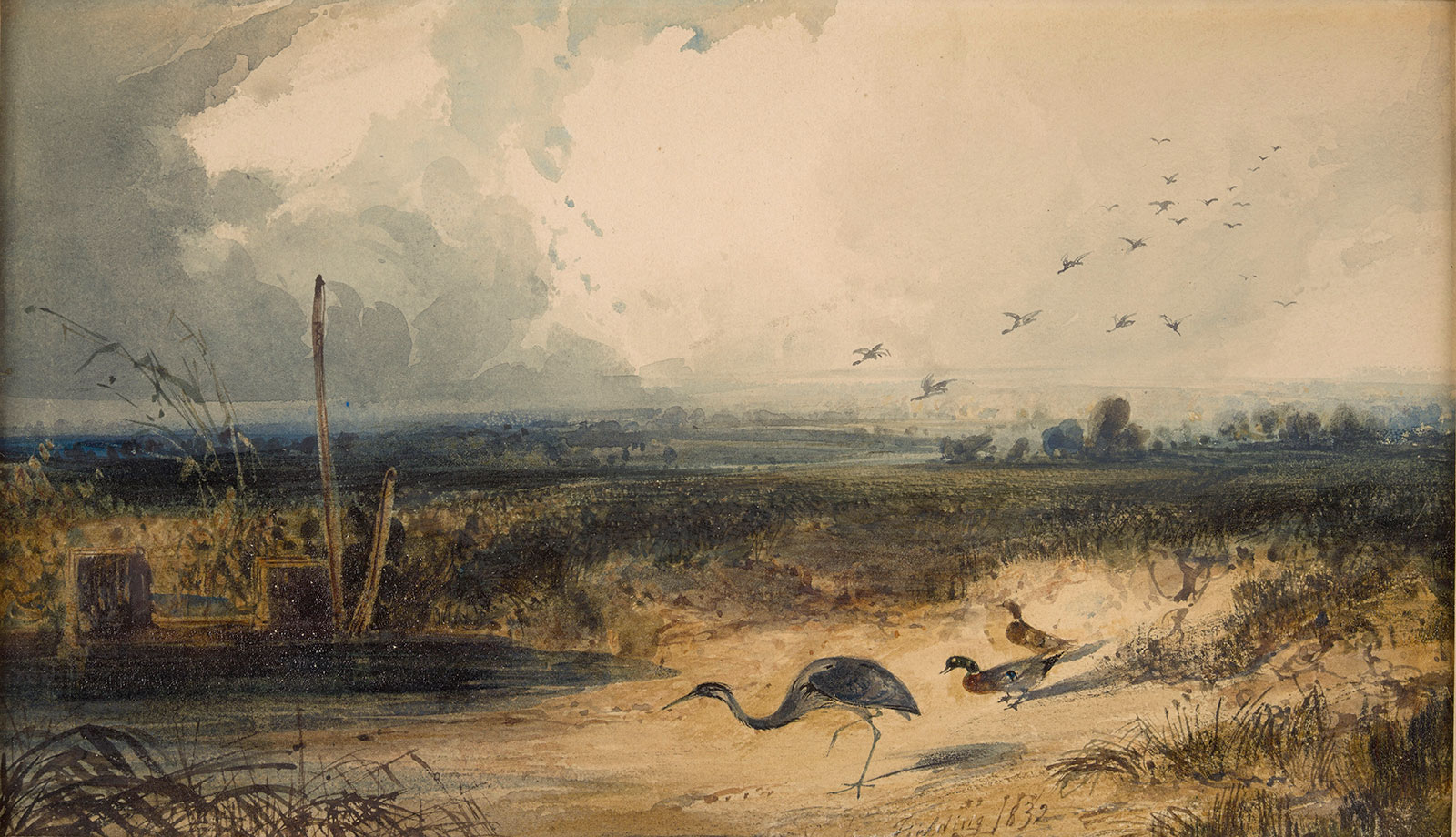 Like his three older brothers Theodore (1781-1851), Thales (1793-1837), and Copley (1787-1855) – all watercolorists, engravers, and drawing teachers –, Newton was drawn to Paris around 1821 by the publisher J.-F. d’Ostervald to realize the aquatints and watercolors of Picturesque Travels in Sicily (1821-1826) and Trips to the Coasts and Ports of Normandy (1823-1825): the prints of these works required that they be sketched in watercolor, a technique the brothers had mastered, reproducing the effects of oil paintings through the use of gouache and gum arabic. Thales was in fact the one to initiate Delacroix in the technique, and the mutual friendship of these two painters who shared a studio at 20 rue Jacob from 1823-1824 is well-known. Indeed, their lovely portraits of one another, hung in the museum beside Delacroix’s portrait of Newton, attest to this.

Thales returned to London in 1824, and Newton continued to represent the family’s interests in Paris with the help of English apprentices. Beginning in 1827, he became the drawing master under the Duke of Orleans, who acquired some of his watercolors despite the criticism of his work shown at the exhibition that year (his watercolors risked a mix of genres that was not to the liking of the academics…). He garnered a solid reputation as an animal painter, notably following H. Gauguin’s publication of the work entitled A Collection of Animals: Subjects taken from the fables of La Fontaine, drawn and lithographed by Newton Fielding. The two collections of lithographs, Sketches by Newton Fielding and Animals Drawn on Stone, published in 1829 by Motte and Gihaut respectively, confirmed his talent for animal imagery that occasionally displays a strikingly fanciful character, far-removed from the compositions of a Landseer, Barye, or Delacroix. This, however, is not the case with these Birds by a Pond, which are set in a soberly realist atmosphere in the blue-grey and luminous ocher tones so typical of the British artist.

Returning to England in 1833, Newton Fielding’s career failed to take flight as hoped. Curiously, his influence on other French painters was essentially spread through the intermediary of artists he had trained in Paris, such as William Callow, some of whose watercolors can be found in one of Delacroix’s sketchbooks dated 1832-1833 (Sérullaz, Inventory of Drawings by Delacroix, Musée du Louvre, nº1739).

Having fallen ill, Newton Fielding came back to France in 1855 and died destitute on January 13, 1856. Thanking his faithful friend Delacroix for the gift he had given him some weeks earlier, Fielding wrote on November 29, 1855: Mrs. Pierret came last night and she gave me the hundred-franc note that you have been so kind to send me. I need not tell you how helpful this money is to me[…], Lee Johnson, New Letters, William Blake and Co, 2000, p.119.

The sale following Delacroix’s death included no fewer than 27 watercolors by the two brothers, Thales and Newton.