“For several months, I have been doing a job that has restored the health I thought lost. I get up in the morning and I hurry off to my work. I return home as late as possible and begin again the next day. […] Nothing gives me more pleasure than painting and now, into the bargain, it gives me the health of a man of thirty.” Journal of Eugène Delacroix, copy of a letter to George Sand dated January 12, 1861.

Assisted by the loyal Pierre Andrieu in particular, Delacroix decorated the entire chapel, from the walls to the ceiling. He devoted three of his murals to fighting angels–Jacob Wrestling with the Angel opposite Heliodorus Driven from the Temple, and Saint Michael Defeats the Devil on the ceiling.

Inaugurated in August 1861, the Saints-Anges chapel underwent restoration in 2015 and 2016 as a City of Paris initiative with the support of the Fondation du Patrimoine. The conservation work, carried out by Alina Moskalik-Detalle and a team of restorers, brings the painter’s artistic brilliance to the fore, for Delacroix alone was responsible for the composition of his monumental paintings. Considered to be one of his final masterpieces, the chapel decoration reveals the artist’s genius and his subtle understanding of scripture. 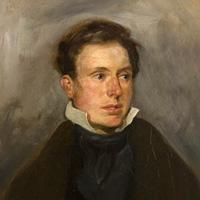