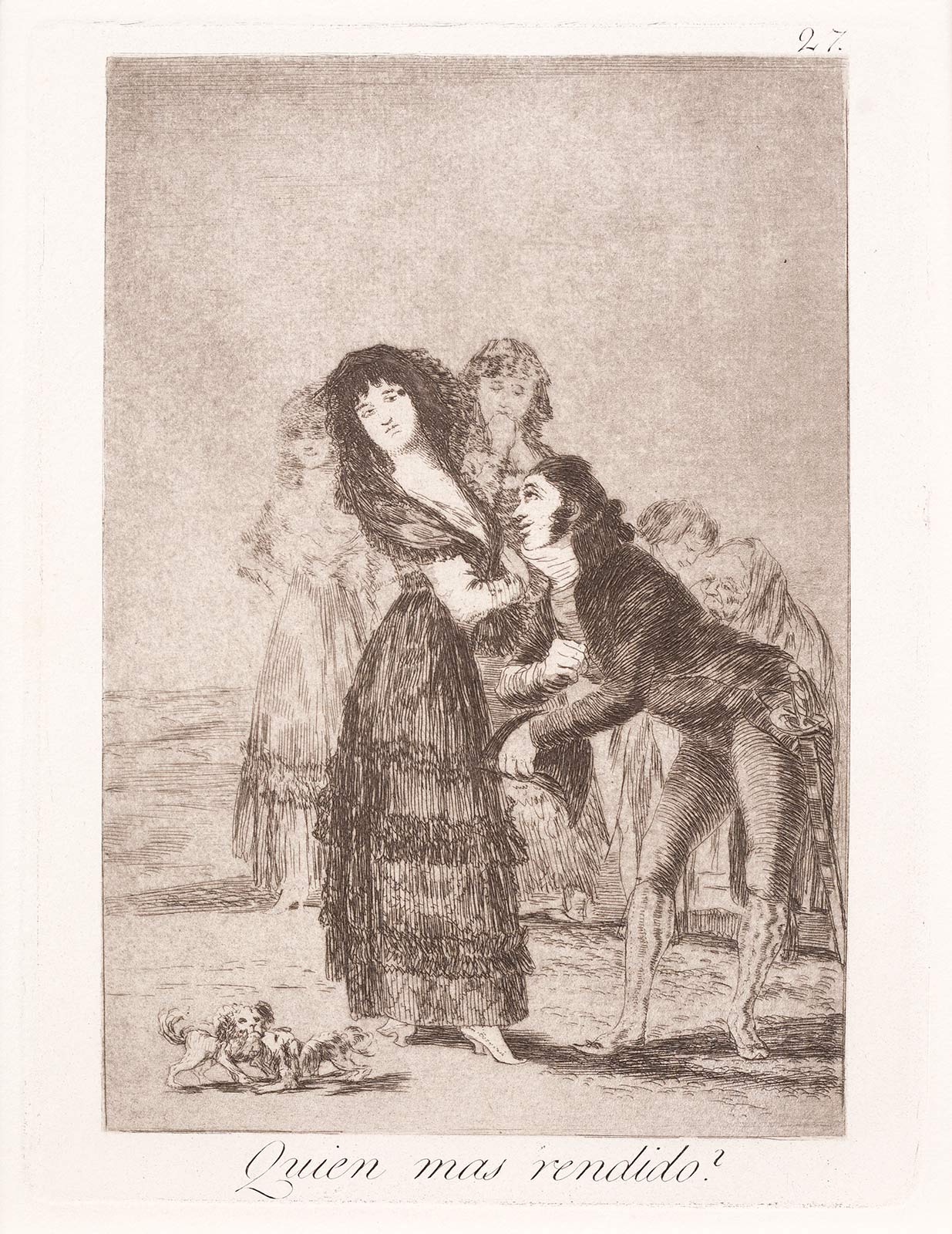 As great an engraver as he was a painter, Goya also made use of the “black and white” of engravings with remarkable expressiveness; the medium seemed to him the means best suited to disseminating his work and ideas. The famous series of Caprices (Los Caprichos), composed of 80 images, was published in 1799 but quickly censured.

From the judges and lawyers to the ecclesiastics, from the child to the old man, from the poor woman to the beautiful snob – metaphoric scenes, moral scenes, church scenes – every image of the Caprichos series, with its moralizing captions, depicts the human condition in subtle, biting satire. In 1803, in order to save his work and protect it from the Inquisition, Goya gave the engravings to King Ferdinand VII in exchange for a pension for his son.

Plate 27 of the Caprichos, “Quien mas rendido,” which Delacroix conjured up in a large sketch displayed in his workshop, vilifies an obsequious courtier bent over in reverence of an arrogant beautiful woman. Behind them stand an unforgiving group of women who seem to be spying on them. The combination of aquatint and etching techniques emphasizes the graying effect on the background scene with the women of various ages – caustic witnesses of the fully lit protagonists. The fine hatching in deep black evokes the woman’s lace dress equally well as it does her suitor’s smooth and satiny coat.

All of Goya Palpitated around Me

The Musée du Louvre’s Department of Prints and Drawings holds several ink studies after the Caprichos that Delacroix realized in often fragmentary, dispersed, and stunningly lively compositions; and the obsequiously bent character from plate 27 (RF 10649) can be found among them. Two other drawings by the artist take their inspiration from this same plate: one of them is held by the Fogg Art Museum in Cambridge, Massachusetts and the other formerly belonged to the Alfassa collection. But most importantly, we find this couple on the large painted sketch acquired by the Musée Delacroix in 2011.

Delacroix discovered Goya at the house of his friends the Guillemardets, whose father, an ambassador to Madrid, was depicted in a portrait by the Spanish painter (Musée du Louvre). The French National Library’s register reveals that in 1816, Delacroix consulted a copy of the Caprichos – a confirmation of the Romantic generation’s fascination with these images. Later, between 1820 and 1824, he produced several sheets of studies – or of copies, noting in his Journal on March 19, 1824: Spent an excellent day at the museum with Edouard… Later, saw some Goyas with Edouard, and on April 7: In the evening, Leblond, and tried lithography. Splendid projects to that effect. Caricatures in the manner of Goya. In 1832, touching Andalusian soil on his voyage to North Africa, he wrote to his friend Pierret: All of Goya palpitated around me. (January 24, 1832)

Much later, Delacroix confided to Laurent Matheron, the author of a biography on Goya that he dedicated to the painter, that the Spanish painter is a great artist whose compositions and verve have often inspired me. (November 27, 1858)

The catalogue of the sale following Delacroix’s death lists thirteen engravings by Goya, including The Portrait of Gaulon, Spanish Dance, two sheets of Bulls of Bordeaux, which Delacroix acquired in 1845 from the Spanish master’s Bordelais lithograph printer, Cyprien Gaulon himself, and six of the Caprichos engravings that he thought to be Goya’s “masterpiece.” (Letter to Laurent Matheron, December 10, 1855)